Let’s get the year started off right with the issues that we really care about. That’s right, watermelon. We’ve all been there, standing at the grocery store, staring at the large cartons of watermelon, sitting menacingly on the straining wooden pallets. You wonder, with so many choices, how can I confidently choose the watermelon for me. Such a decision weighs heavy on your heart, for you could be filled regret for an entire week if things go poorly. You take a cue from the older asian women confidently tapping the melons. Do they really know something I don’t and understand the full internal structure of a melon from such an innocuous tap? Perhaps through decades of experience they have learned the secrets of the watermelon, but it turns out to be a tightly guarded secret. There are only rumors that leak out into the open that give us a hint at the truth of the watermelon tap.

Today, however, is the beginning of a new era. One where these tightly guarded secrets, shrouded in speculation and superstition, are thrust into the scrutinizing light of science. Let us together embark on this journey to explore the secrets of the tap and other incidental methods to finally allow all of us to choose our melons with the utmost confidence.

Today the team took on a new member–one who proved integral. That’s right–we’re talking about specimen number seven, a watermelon if ever we saw one. Though our discussion of her as a team member may be more lovingly symbolic than actual, given that she cannot continue on with us physically forever, she will always be in our hearts. And in the memory of our stomachs.

Taste: 6.25 A flavor for the ages! We were knocked out of the park. Truthfully this was the best watermelon we’d had all week. But really, it was good. Don’t let that average-seeming 6.25 fool you. That just means there were minor inconsistencies and that there’s room for improvement. But it was good.

Texture: 7.25 The flesh was so succulent! Consistent, firm, juicy. Sensuous. 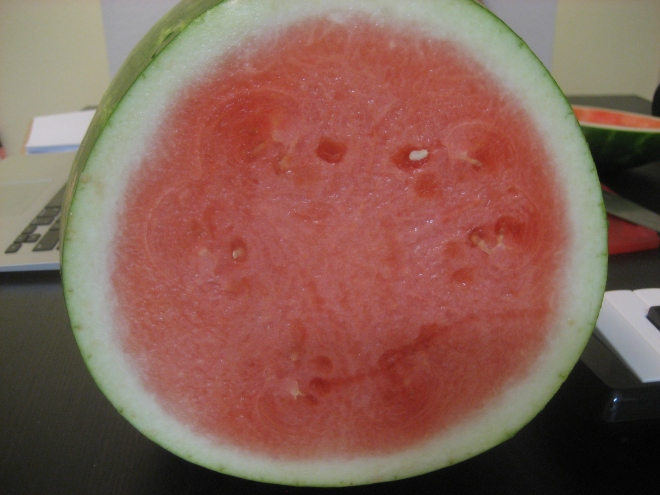 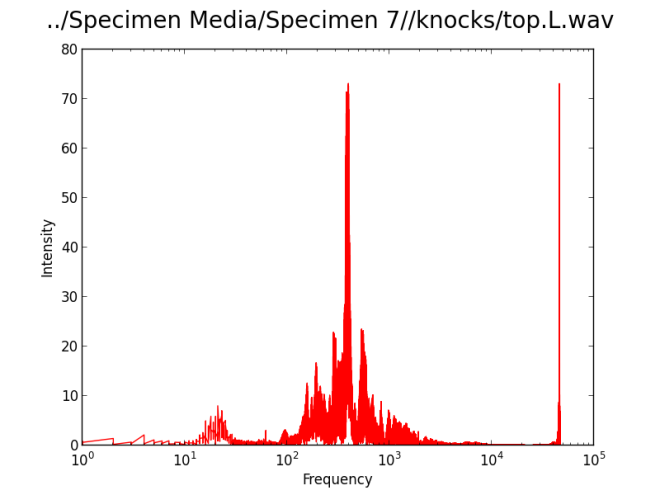 To tide you over until specimen 7.

Faith brings on board a couple new features to our testing setup. People have asked and we finally delivered. That of course is the use of Personal Protection Equipment (PPE). I’m sure many of you were aware for the previous 5 specimen tests, we here at watermelonstudy have been in violation of OSHA standards, but today we remedy that.

Here is the testing team for Faith, stoic in the pursuit of knowledge as always. 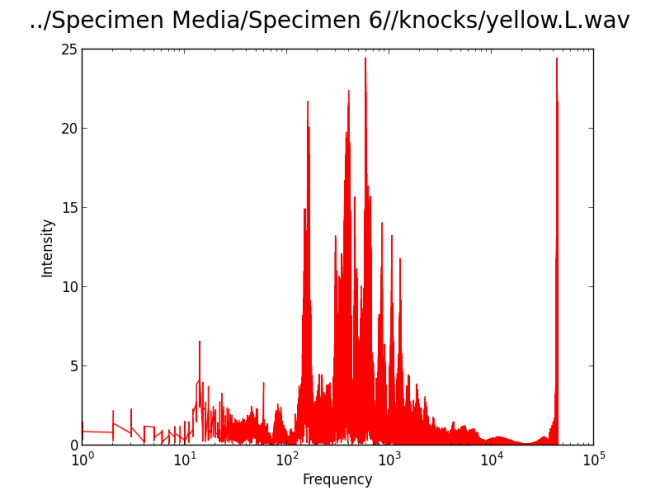 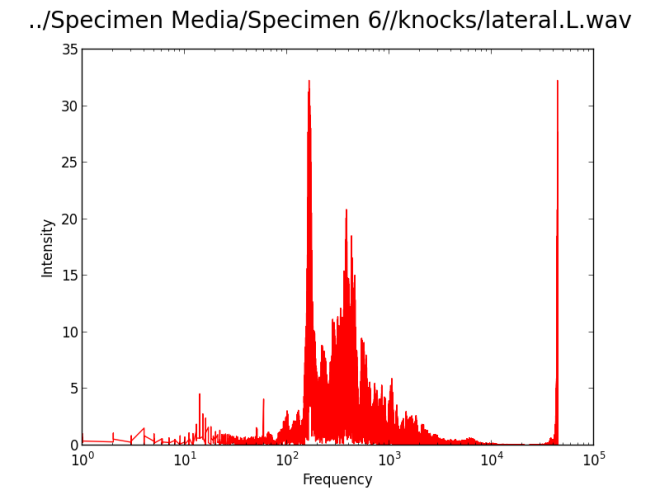 Taste: 4. Overall acceptable, but my heart is not on fire.

Texture: 4.5. The inconsistent texture when not dead in the middle is a deal breaker. 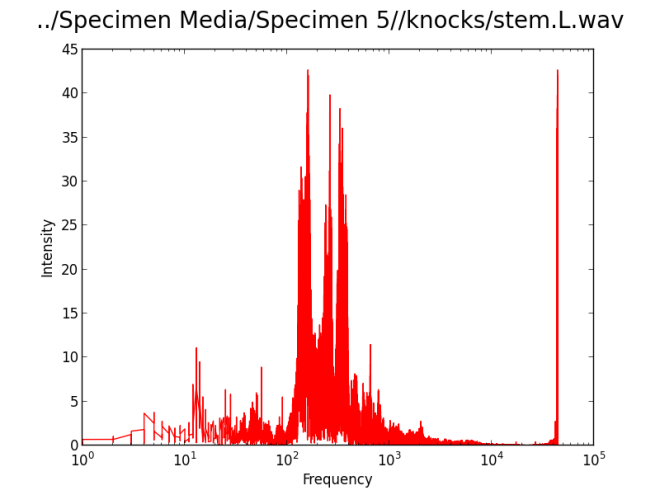 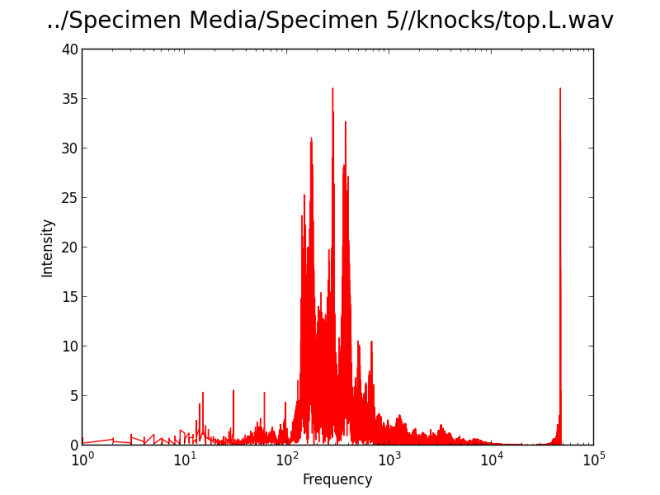 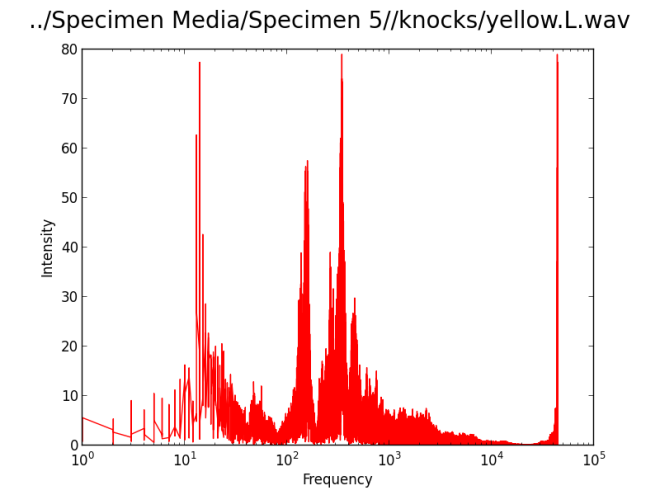 O Dani Boy! This is specimen 4 coming in at a moderately hefty 12.21 lbs. Here are her head shots: 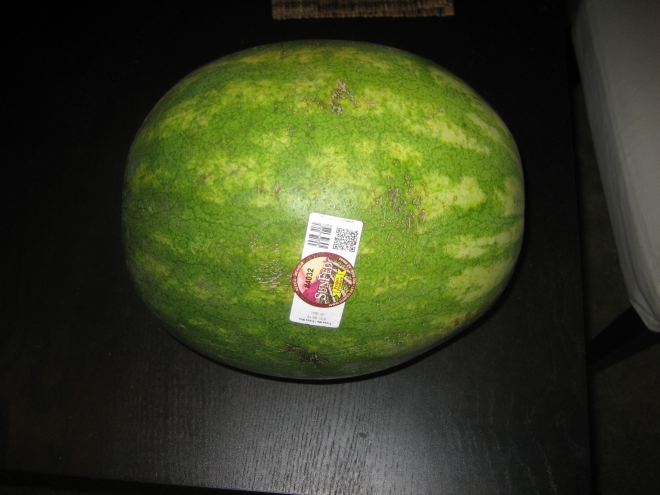 Taste: 5, while an improvement from last time, still lacking upon further reflection. I think in the video I gave such a positive reaction because I’d been deprived of the splendor of watermelon for a week.

Texture: 4.5, same as before a bit soggy, though in this case it was actually consistent. Consistent sog is better than inconsistent greatness and mush.

Picture of the cut watermelon 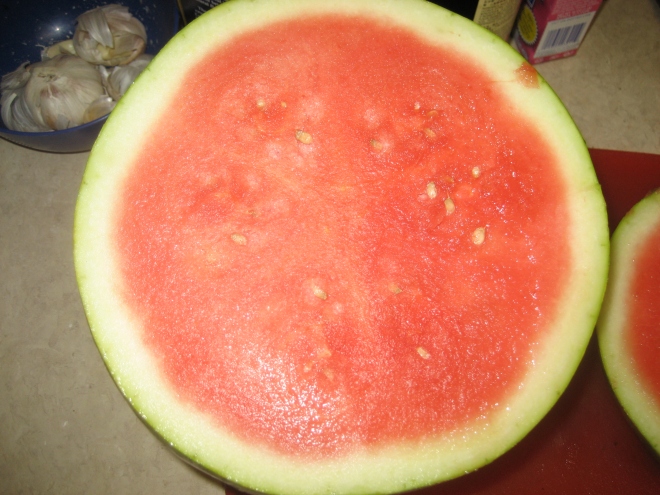 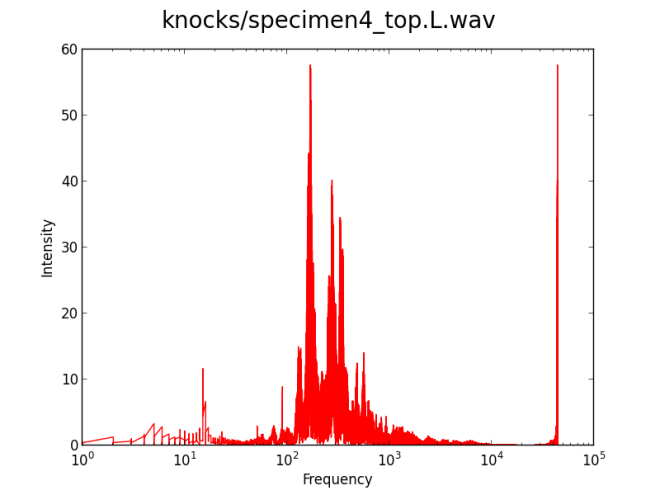 As with Back To The Future II: To Be Concluded…

There have been some valid concerns about the consistency of our methods. Specifically with the tap analysis. Here we aim to demonstrate that the procedure to perform the taps as well as the recordings are precise and sound is reproducible. While we’re going to eye ball it for now, we performed 3 sets of taps on Cecilia and recorded them. We then created the fourier transforms and use that as a proxy for the sound and compare the signals visually. 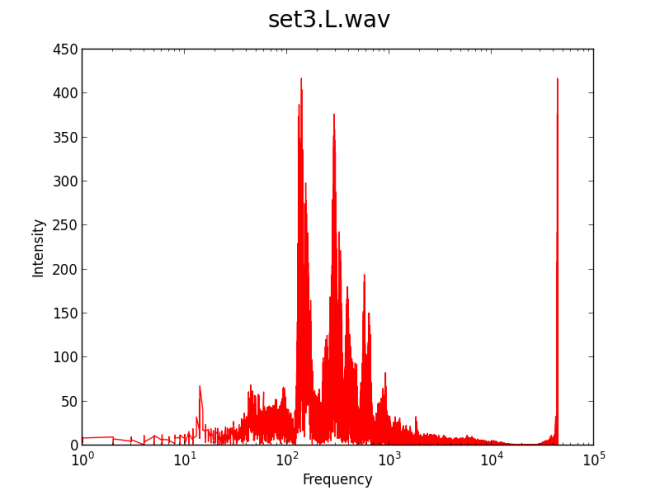 As we can inspect visually, all three sets look pretty much identical in the fourier transforms (FT). This is encouraging as this shows that the tapping and recording gives us consistent measurements. While this is great, we should also try to redo the setup to make sure there is no variability in positioning the microphones from specimen to specimen. Additionally, in the future we should derive some way to score two FTs to show that the replicate taps on the same specimen are much closer than when comparing equivalent tap locations between melons.

Its Cecilia’s turn. This time though, she won’t be breaking our hearts (hopefully). Though we randomly selected her this time, she was still welcomed into the experiment with open arms. A seemingly healthy melon at 12 pounds 7 ounces, here are pictures from when brought her home for the first time: 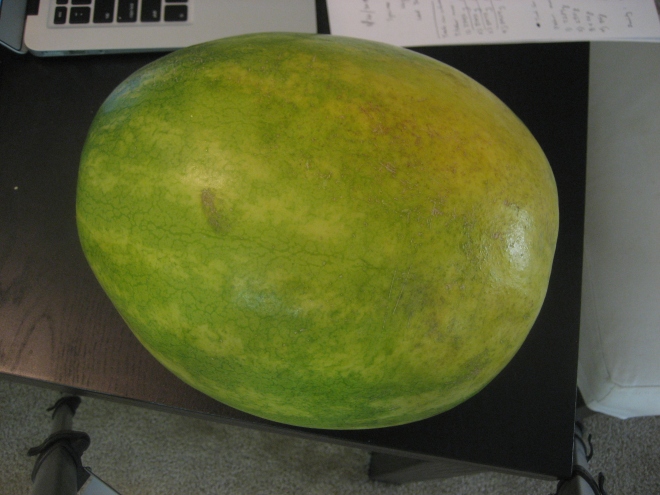 This is our musical tribute to Cecilia.

Texture: 4 – Texture is a similar story with Cecilia as it was with Bertha: not impressive. I don’t even think the watermelons are even trying anymore, its like they have lost the will to strive for better texture. Its a real shame when they put much more heart into it.

Taste: 4.5 – Cecilia has truly not broken our hearts as the taste is improved from Bertha, at a reasonable score of 4.5, but still there remains inconsistency in taste, which leaves much room for improvement.

Below are presented the fourier transforms of the knocks. 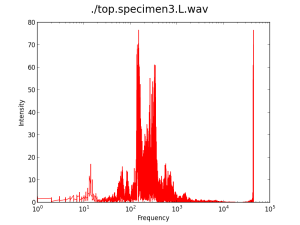 And we can see the melons leaning towards higher intensity of higher harmonics like Bertha but unlike Alice, but still we’ll need more specimens to make any calls.

Cecilia hasn’t broken my heart, but she is shaking my confidence.

and here she is getting her measurements taken: 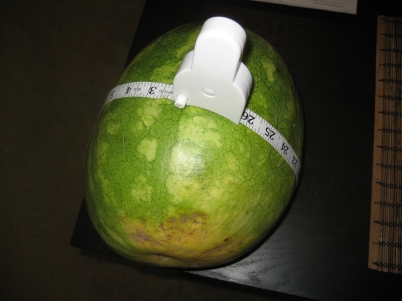 There was a old melon named Bertha
she spent quite some time on the eartha
And blemished in sight
didn’t look quite alright
Even though sixty seven was her girtha.

Density: 0.939 kg/L (When it comes to watermelons, Cosmo ain’t got nothin’ to do with my selection)

Texture: 4 – Overall the texture was soggy. When chewing there was no crispness for the most part. There were flashes of brilliance but it was below 30%, and this inconsistency severely lowers the texture score.

Taste: 3 – Sweetness was lacking. In some portions I felt as if I were eating something tasteless and bland, definitely not a vibrant watermelon that kept calling me back for another bite. Additionally, consistency was also a problem for taste, for there was one bite that was fantastic but one out of 20, is unacceptable.

The frequency response curves to the taps. We do not have a sample for the stem because of the damage to the actual melon we decided the tap would not be informative. 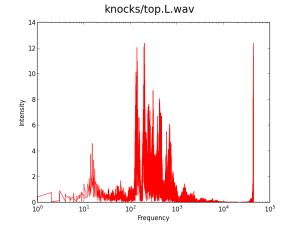 We can see that there are many more higher intensity harmonics compared to Alice. Though we can’t make any conclusions whether these are meaningful until we get more sample points, its still kind of cool.

We are definitely still in the early stages of refining our methods. We have added in measuring volume, girth, and height of each of the watermelon. Though this still might be insufficient, its not an unreasonable start. We have also retroactively added literature for each of the specimens to give them each a little character.

This is the big one! The very first watermelon that was tested on Jan 15, 2015. I know this is the winter, but I could not resist the temptations of the succulent red flesh.

Here is a quick picture of the first specimen. Since Specimen 1, is rather impersonal, we shall dub thee Alice of Watershire.

There will be tales written of thee, one of which is shown below:

Alice was the first among many
and though she did fetch a pretty penny
her flesh was quite sweet
I had to take a seat
For she was worth even a twenty.

The following is a video documenting the testing procedure to give transparency to the study.

The score given to this particular specimen was a 7.

Our first step was to take the recorded audio of the taps and start analyzing it. The first step was for each location we would do a fourier transform to convert the time domain recording to frequency domain.

Below is the Fourier Transform of the taps from various portions of the specimen. The x-axis is plotted log10 of the frequency and y-axis is the relative intensity of each frequency. 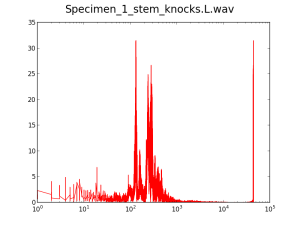 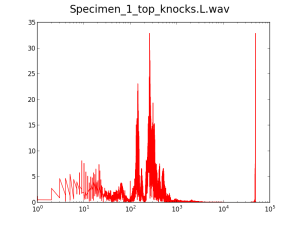 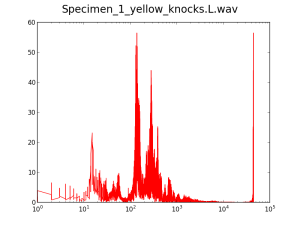 Very superficially we can see that the knocks of the lateral and yellow spots are very similar as one would expect as they were roughly of the same latitude but opposite in longitude. This especially evident in the 200 hz ranges of the frequency response.

Watermelons are assigned a unique identifier and are photographed upon purchase. While initially specimens were assigned a number, we have found this to be rather impersonal. We want each watermelon to feel special and loved, and thus we have decided to name our watermelon in addition to giving them just a unique identifier. Weight is calculated by the produce vendor and recorded on the clipboard. To test the sound of the tap, a diagnostic hammer induces sound by simple even handed taps at 3 critical locations on the watermelon: the stem, mid lateral section, and top. 5 taps are performed and resulting sound is recorded in stereo from two suspended microphones approximately 10 cm away from the top of the watermelon on off perpendicular angles.

Taste measurements are performed by using a knife on the upper hemisphere of the watermelon, close to the top side. The sampling utensil is used to acquire a semi circular piece of flesh from the center of the top portion of the watermelon. The objective sample evaluator then consumes the watermelon and issues a quality score. While not decomposed explicitly, the score takes into consideration the taste and texture of the flesh.